1st May 2009, it was labour day and my mother decided to “jio” us go for a one day trip at Kuala Gula. Before that I have never heard of this place before and this trip was actually organize by my mother’s customer and her customer introduced her to follow their tour guide to this trip.

I woke up at 7.18am that morning (damn sleepy, because the previous night I slept late cause cannot get use to sleep early yet). We gather together at Goh Tiao Loh with my uncle, aunt, cousins, granma, and my cousin’s boyfriend. We went there by bus, school bus =.=” It was quite uncomfortable and I couldn’t fall asleep during the journey.

After.. I think.. 2 hours later, we reach Kuala Gula. First thing first, the tour take us to take our lunch in a small kopitiam. We ate fried rice with many many prawns but the prawns not very nice only, and crab fried mihun. The mihun was full of the crab’s small little shells so it was not really nice to eat.. Haiz..
The next destination was really sweat. They bring us to buy local foods. What so sweat about that? They were selling at a terrance house, with all the foods packed and put on the floor in boxes. There were also free Rojak.

Next, they brought us to a salted egg “factory” to see how they process salted eggs. =.=” The tour guide said that they first put the duck eggs in a red mud, then throw it in a machine (the tour guide pronounced it as “misin”) so that the eggs were covered in a black dust (I dunno what was that). Something like that.. I wasn’t really interested in that so.. =.=”
Here are some boring photos… This is the Artificial Intelligence “misin” that they used to separate the different size of the duck eggs in to 3 categories.. =.=”

After that, they brought us to the next destination, which was the fire woods factory. Well this place was at least slightly better than the previous “factory”. It was quite interesting. I read about Weasley’s novel before called 木炭 and the semi-sphere thing where they put all the dry woods inside and burned it for months (I forgot how many months already, if not mistaken it’s almost a year) was exactly like the one described in the novel. There was one which was emptied and they allowed us to go inside to see. It was hot, really hot inside, when you came out from it you will feels like the normal temperature in a room was as cold as an air-con room. 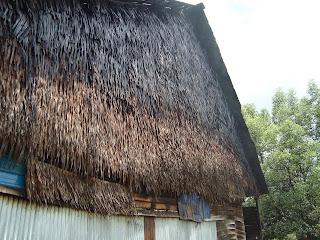 Destination after that was the stupiest. They brought us go drink coconut water. =.=” the most stupiest was the location was very deep inside and we have to walk a quite far under the hot whether just to drink Penang also have coconut water. =.=” Because they were also selling coconut water with alcohol which is illegal so they have to do it far inside so that they wouldn’t be discovered by police. =.=” It was so hot and some of us decided to go back to the bus first because my uncle and my granma was on the bus. When we back there the bus’s door was locked!! My uncle tried to open the door from the inside but he can’t find the right switch! Oh my god it was really god damn hot and the place where the bus parked was no tree at all!! Killing!! So we walk back there and find some tree to stay out from the sunlight! After that I was not feeling well and I feel very tired. Feeling like going to fall sick soon and the next Monday was my first day to work!! STUPID!!
The following photo is the long long way of the way to get inside and drink alcohol coconut.. =.=”

Next destination was 华圣宫. When we reached there, the tour guide told us that we better went to the toilet, which she pronounced as “tuilet”. Then we were told that there was a big Guan Yin statue which imported from China. At first I thought that would be something nice to see. However when we saw that… well I shall say that Kek Lok Si’s Guan Yin statue was more impressive.. =.=” There’s another thing that worth visiting, or I shall say I THOUGHT worth visiting, here which was the Chinese’s legend about eighteen level hell exhibition. It was small and only took you about 5 minutes. However it was quite informative and it can warn people to stop doing evil during their life in human’s world so that you don’t have to be tortured in the hell after you died.
Besides, there was also a “heaven” there, where you can visit by climbing the stairs to about 3 to 4 stories high. You can see the view of Kuala Gula there where it was all oil palm jungle and you can’t see the ending.
Photos:

After the temple, I feel so sick and tired! Oh gosh, I was scared that I will fell sick. It’s all because of that stupid alcohol coconut to blame!! But I still have to continue to the next destination which was the belacan “factory”!! There was nothing to tell in that place.. =.=” only see people drying “hie bi” and the “misin” they used to do belacan.. After that we proceeded to the fisherman village. We get to go on the boat and go out to the sea. Well it was really no purpose.. Only see people catch “ham”, sea gooses, eagles and monkeys.. =.=” The monkeys was fed by crab, they catch crabs to eat. They brought us along the sea for an hour and went back to somewhere near the dock, to see the place where people feed sea fishes and my dad bought some big fishes and crabs there..
Photos.. 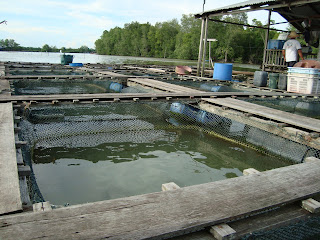 Feeling relief, the next destination was our dinner. We went to a seafood restaurant near by. It was ok.. nothing special, so I didn’t take any photos of the food. And then we were told that we will drop by Taiping on the way back to Penang. Feeling curious, I thought we will be going to the Night Zoo in Taiping since there was the only place we could go in the night. When we reach there, they brought us to buy “miku” =.=” and then, going to touch boars!! =.=” Touch a living boars which, the tour guide said, were the “god” of Indian’s religious or something like that. And told us that after you touched the boar will win lottery =.=” Oh my gosh, I can’t believe this.. Touching boars during this H1N1 period?? What the xxxx.. And purposely stop by Taiping just to touch boars!!?? Unbelievable! When we were there, there were so many buses and travel agencies that brought tourist here to touch the boars!! We were told that at least thousands of people were there and the boars could have run into the woods!! Oh my gosh, why on earth was there so many… “believers” believes that touching the boars will win lottery? If so, why those Indian guys who were guarding the boars still guarding the boars there?! While they can just touch the boars and win lottery and shake their legs at home?! WTF!! LUCKILY, when we were told that there were thousands of people in there, everybody agreed giving up touching the boars and FINALLY took off and came back to PENANG!! THANK GOD!!

As a conclusion, it was really a boring tour that make me almost fell sick!! I seriously urge those people who planning to go spend your holiday there to think twice! Malaysia really is lack of vacation spot!! really… =.=” Oh Ya! At least we learn new vocabularies there!! “Tuilet” and “Misin”!!