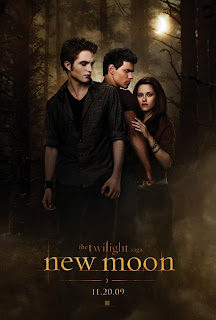 Time for another movie review! This time is movie that everybody talking about – The Twilight Saga: New Moon. What I can say about this movie is, the advertising done extremely well, everybody is talking about it, especially Fly FM. They have been discussing about this movie for over a week! Some said nice, but most of the listeners and DJ said that it’s bad!! Well, as for me, it’s not good. Not until sucks but still, below my expectation. Why? Well as my tradition in this blog you might have already know, I’ll post the trailer first… 😛

As some of you might have heard in Fly FM, the Rush Hour DJ criticize this movie badly! Especially the actress Kristen Stewart as Bella, was totally sucks! They even came out with a contest called “Can you be a better Bella?” that require listeners to call in and act as Bella because they think EVERYONE can be a better Bella. Not to mention the bad storyline of the movie itself!

In the first movie, Twilight, I heard that it was a low budget movie as they never expect this movie to sell good when it hit on the Cinema. Obviously, this movie was popular was just because of Edward, not Robert Pattinson, but Edward. Do you guys think that Robert Pattinson really is that SO good looking? I don’t think so, there are more good looking celebrities compare to him. As I heard it from my friend, the author of the Twilight novel describe Edward is the most perfect man in the world that makes girls so crazy about this novel. After I’ve watched the first movie, it was actually so so, however it was so popular, so I reckon the novel must be nicer and considering to buy the book for read. Luckily, one of my Harry Potter novel’s fan friend urge and warn me so seriously that the book were totally “for girls only” and told me that the book were popular just because of Edward. Well I think she is right.

As the new moon came out, what I’ve heard from people discussing, were just Edward and Jacob good looking. About how Jacob have such great and beautiful body shape this and that. I’ve even saw my friend wrote in Facebook “why so many people like to watch half naked guy running in the big screen?!”. Those who don’t crazy about Edward and Jacob said that the movie were boring, that they always talk talk talk and there were less fighting scenes or visual effects stuff. Well that I’ll ignore as I’m not the “visual audiences”. Come on, this is a romance movie, what do you expect? Werewolves fighting Vampires for 2 hours?

So what do I expect from this movie? I was actually expecting some touching or memorable romance story instead of the fighting scenes. However, it really disappoint me so much. The love story between Edward and Bella, 0% touching, the single love from Jacob towards Bella, 0% touching. One of the reason, is because of Bella were so bad in acting! She looks like heart attack when she were crying in the forest!! Throughout the whole movie, while Edward leaving Bella behind, there were no one shed of tears from her. And Bella acting selfish about how she treat Jacob as a spare tire, I can’t feel the bad feeling towards Jacob at all. What I see from this movie, were actually just SELLING HALF NAKED GUYS REALLY!!

Besides, the storyline itself were just sucks! A vampire leaving a human he love because he though that was the best way to protect her, and the girl acting stupid and being reckless just wanted to see the vampire, and when she were disappointed she turn to the werewolves instead, and then she turn back to the vampire when she knows the vampire was in danger. Lame and pointless =.=” Not to mention when Edward though that Bella was dead, he almost exposed himself just want the vampire committee (I don’t know exactly what the committee were =.=”) to kill him. What a misleading act to teach the youngsters! And it was totally pointless!! When you heard some story like that, about how a guy can’t live without a girl he loved, it was suppose to be touching, but honestly, totally 0% touching.. I felt nothing at all. LAME!!!

The only thing I can give compliment to this movie is they didn’t affect by the movie trend nowadays were people were just looking for visual effects, CGI, and massive explosions. That’s the only good thing that I can think of this movie =.=”

I rate this movie 4/10
No idea how this kind of story can get best selling novel.. My younger sister is one of the fan =.=”