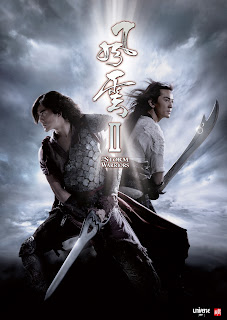 Wow!! Finally!! Storm Warrior is back!! The first episode was 11 years ago!! I remember I love this movie so much!! Rewatch it in VCD again and again. Can’t help. You know, kids always like to do that. Haha.. But seriously I miss the movie so much. Each characters was unique and the storyline was so creative and memorable. Especially 黎耀祥 as 泥菩萨. I always think he is a very good actor. Especially when I saw him in TVB Journey to the West. Big congratz to him lately for getting best actor in TVB award ceromony. By the way, back to Storm Warriors, I believe there’re a lot of people out there waiting to watch this movie. Here is the trailer!!

Interesting right? This time it will be directed by the Pang’s brothers. I was looking forward to it when I first heard they’ll be the director. As we all well known, the Pang’s brothers were known famous at making ghost movies. From their first movie “The Eye” were good, scary and good storyline. Not to mention they help our Malaysian actress Li Xin Jie become an Asia well known famous actress. And the movie before Storm Warriors II by the Pang’s brothers was 鬼域 by Li Xin Jie as well. That movie was not bad, and the CG was good too, if compare to other Hong Kong movie CG. And I remembered watching The Eye II by Shu Qi, the CG was nice! Especially when the way of ghost’s hair floating. I like it 😛 So I have quite high expectation on this movie. However…. IT DISAPPOINT ME A LOT!!!

The CG was really good, it can be declared as the best CG in current Hong Kong movies, or any other Chinese movies nowadays. U try compare with the pirated China Transformers movie and you’ll know the difference =.=” But still it’s not good enough if compare with Hollywood of course. I’ve heard that it was film in indoor blue screen for all the scenes in the movie. It makes me feel narrow all the time. It was like not enough space to fit all the actors and actress in there. Unlike the first episode there’re still some real outdoor set which have a nice view and large. They should have use the nice space and view in China well instead of depending on CG all the time. It makes me feel tension and uncomfortable. Besides, I heard people said they have copy the way movie 300 filming the war part. I can’t comment much on these as I have not watch 300 before.

Talk about the characters. As we all know, the character Cloud is still Aaron Kwok and Ekin as Wind. However, the character Chor Chor has been changed. It used to be Shu Qi who are much more better than the “vase” now in the new movie. She was so “kalefeh” and her existance in this movie was pointless.. Not to mention Ah Sa as Dream in this movie. This is the new character which doesn’t show up before in the first movie. But the director didn’t explain well who she is.. She just show up suddenly and it looks like she have something with Wind and we don’t know what is their relationship all about!!! I heard from my friend who is the comic fans of Storm Warriors only I know that she is his wife! As for the movie are they married or not, I’m not sure. I guess they haven’t. =.=” and the villain this time is 绝无神 which, the non-comic-reader audiences don’t know who he is at all!! Just know that he was strong and invincible.. And show up suddenly to conquer China by capturing the Emperor. Oh ya, I’ve almost forgotten, Nicholas Tze was in this movie as well, as the villain’s son. Well, what I can say is his existence was pointless as well. I almost forgot that he was in the movie =.=”

Then you all know la, after I mention what that villain did. Of course he was trying to take over China and wanted to be a legend in the wushu world and become the Emperor. And then our super hero Cloud and Wind were the only hope. LAME!!! Actually, the true point of this movie was not the villain, he died easily and fast. =.=” The real backbone (a weak backbone this is) of this movie is the “epic” fight between Wind and Cloud. Where wind become evil because wanted to use the power of the evil forces to defeat 绝无神. Actually it was no need, because Cloud learn Kung Fu from 无名 in 3 days and become very powerful as well =.= he invented the new sword strategic. Talk about this, it was funny. About how Cloud sifu try to think a name for this new strategy. He invented a new Chinese word as well, but the director make it as his sifu is uneducated and simply invented a word to foul Cloud. This scene was actually exist in the comic but the director delivered it badly!!! Sweat..

Talk about the “epic” fight, the director really was overused the slow motion! If they remove all the slow motion I think the movie duration will be shorten about 30 minutes =.=” Even when Ah Sa got punch into the face they made it slow motion. I’m really speechless.. And the fight between Cloud and Wind were dragged so long! It was like an endless fight and it makes me feels sleepy! And the two famous sword, 绝世好剑 and 雪饮狂刀, although they appear a lot, however they have lose the power back there in episode one! They were used as like a normal sword only! Not to mention Cloud’s exclusive technique 麒麟臂 wasn’t used at all! If I haven’t watch back the first movie I can’t remember he changed his arm before into this powerful arm. And Cloud’s technique that control water and attack enemies with water were appeared only ONCE in the movie, which looks like Harry Potter and the Order of the Phoenix where Dumbledore used the giant water ball to attack Voldemort =.=”
AND! They’ve also copy Spiderman! There was a scene where Cloud use something like spiderweb to tied up the bad guy =.=”

Last but not least, the storyline of this movie is already so weak, but their dialogue were weaker! All the dialogue were so simple and it was like kids dialogue! Especially Chor Chor and Dream these two “flower vase”. They were like 风大哥 and 云大哥 ALL THE TIME! Makes me frustrated and wanted to slap them.

I rate this movie 4/10 for great CG.
The CG was really the best among Hong Kong movie industries. However, the storyline were so weak, and the directors delivered the story badly. Disappointed.
Looks like I better watch back the first episode instead to remind me my passion towards Storm Warriors 🙁

Quote from the first episode to describe this movie: