It was Halloween!!! I’ve never attend any Halloween Party before this. I’ve always wanted to do something on Halloween! Attending a costume party.. Guess what I would be if I can choose what costume to wear on Halloween! Some of you might have already know! YES! CORRECT!! Lord Voldemort!! The Dark Lord! He-Who-Must-Not-Be-Named! However, too bad this time I can’t choose what I want to be! 🙁

We prepared this party 3 weeks ahead. Before Kenneth and Esther left, they have to trace rats, bats and spiders, print out from the computer, and cut out all the rats, bats and spiders. Then Jasmine and Andrew went to buy some spiderweb, and small Halloween plastic pumpkin, and some materials for us to decorate. Me and Ding Ren’s job was less difficult. Doesn’t need much designing skill. We have to make a huge spider to hang at the ceiling, make ghost with some cloths and balloons, hanging some stuff here and there. My expertise was hanging spiderweb. I can make a nice and real spiderweb! This were the outcome! 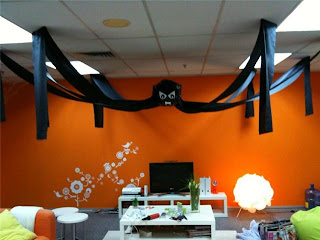 Of course, not to mention, our decoration supervisor, Ms Tee, her responsibility was think and design the main entrance, which was the most important because that was the first impression for our guests. So, this was her sketch..

And Ding Ren do the magic!!

Tada!! Impressive huh?! Hardly imagine, our programmer Ding Ren have a nice handcraft, cut and join all the houses with a few pieces of cardboards (branded cardboard bought by Jasmine, must be expensive because it were really thick).

When the lights off, and add some lighting behind the castle.. Spooky huh~~ 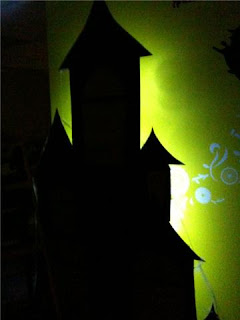 Besides, we have a runway stage! For a fashion show.. Kenneth getting excited when he heard this, he love to imitate Project Runway..
So, with this deco, this time is going to be a big party huh! We’ve invited about 20 guests. And what are we going to play this time?

This time (Jasmine’s plan), there was a costume competition. Previously all our parties were just wii tournament, which our Jasmine think it wasn’t fair because most of the time girls lose cause they were not that good in console game, and because she said we were “pakat” at the Moon Moon Celebration and cause her lose the game and have to wear a weird costume (made by herself) and distributing moon cake along Gurney Drive! And so, this party was also known as “Gizwiz Halloween Party – Revenge of the Queen”!!! Scare huh? So what was her revenge plan? Yes, this time was her field! Design!! Costume design!! Argh! Nightmares for me and Ding Ren cause we were both programmers! Not to mention Zing round a big round to curse me!

Quote:
“Zing Chuang
Keng~ but even u last minute pun sure will not lose lah….lol…other ppl without design exp lagi teruk
October 27 at 12:05am”

So what’s the punishment this time? Distributing gifts at Upper Penang Road, WITH THE LOSER COSTUME! BOTH THE MODEL AND DESIGNER!

Rules:
Each of us have to draw and see who will be our model, and draw for what you gonna dress up your model, with only the materials provided, we were not allowed to bring our own materials, and we were only allowed to complete our costume in the office.
My model, was Jasmine! And I’m suppose to dress her up as an Axe Man! 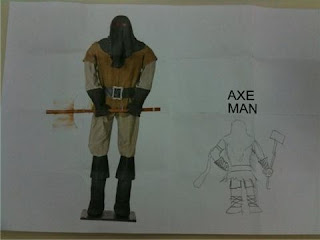 TOO BAD!! My designer, Esther, HAVE A VERY BAD LUCK! BECAUSE, SHE HAVE TO DRESS ME UP!! AS A SEXY PRINCESS!!! Thundershock T.T I couldn’t accept this, IF (touch wood) I lose, I HAVE TO GO TO UPPER PENANG ROAD AS A SEXY PRINCESS!! Oh my god, took me a week to accept the reality. I can dress up as whatever costume, ghost, Vampire, Dracula, Lord Voldemort, Werewolves, ANYTHING! But not a “ah kua” T.T This is really serious because it will affect my dignity T.T I even have insomnia 2 nights before the party.

And then, there was a wii tournament a week before the party, the highest mark get to choose from the limited materials provided, which included MONEY! There were 3 RM10 waited to be picked. Fortunately, I won the wii competition, first place, and so I picked a RM10, and an axe for my Axe Women, Jasmine. And so the competition begun, we have a week to prepare and make the costume.
With that RM10, I bought brown color cloths 2.5 meter for the top, black color cloth 1 meter for the mask, a black rubber glove, and I still have RM3.50 left..

and so this was the first stage of my costume.. 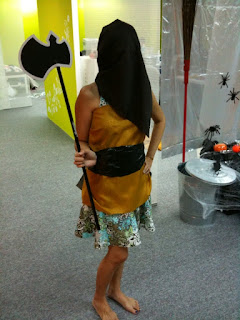 Boring huh!! I was freak out!! WORRIED!! And thanks for Andrew and Jasmine on giving me advice what I should add on to make it looks interesting, plus with my creativity.. I bought more materials with the RM3.50, yellow gold glass paper, shinning powder, and shinning moon and stars..

FINALLY!! The big day is here.. 30th October 2009.. Guests started to arrive around 7pm, and all the models were starting to make up while the guests enjoying the food!!

And then, the show begun!! May Yen as the host.. Now all our guests were the judges, they have to give marks base on the costume, runway music, and performances.. Here are our contestants!! 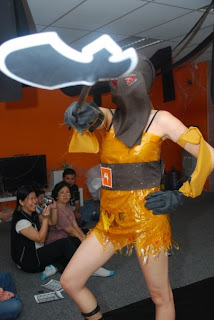 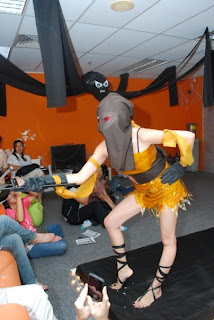 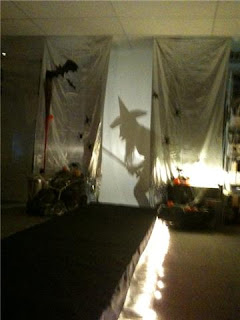 And now.. After the marks were calculated.. We have 2 winners! So they’ll have to PK!! And the guests will cheer for the real winner!! The 2 winners are…….
**drum roll**

And after the judges cheers…
The REAL winner..
IS…

Poor Apple, she was the winner, AND the loser.. LOL

And now.. TIME FOR PUNISHMENT!! Andrew were so kind.. Accompany them walking around Upper Penang Road, and Esther accompany them with the make up only.. LOL