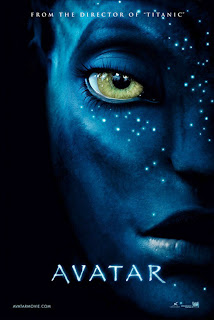 AVATAR!!! AVATAR IS HERE!!! Oh my goodness, I’ve just watched the most amazing movie ever! James Cameron! Director of Titanic, Terminator 2,3! SALUTE! YOU ARE GOD!
This whole movie, is written and directed by James Cameron, took him more than 10 years to complete this movie! Because he was waiting for the technology!
AND! TODAY! I’ve just watch the most amazing movie ever! Originally I can’t watch it in this weekend, however, I’ve squeezed out the time because I can’t wait!!! Too bad the 3D tickets was sold out! But it’s okay, because I’m going to watch second time in 3D!!!
For those who haven’t watch the movie.. 3D is a must for this movie! MUST! Oh my God, I’m too excited 😛
Okay, trailer first!!!

Wahahahah! How should I start the review.. Hmm.. What I can say, is that it’s more than a movie! It’s not just a movie! I was totally went into Pandora! I was totally into the movie!
James Cameron, how on earth you be able to create this world?
I love Titanic back on 10 years ago. Although I didn’t have chance to watch Titanic in cinema, but still..
And now, Avatar is totally brought the movie industries to the next level!
Hey Micheal Bay and Roland Emmerich, this is what I call a movie! This is what the money worth spending on! Not gigantic robot gaying around, not massive explosions, not massive CGI, not overused hot girls, not over-childish-humours.. Storyline is always the backbone of a movie! Creativity will always win!

And for those CGI admirers, explosions admirers, PLEASE WATCH THIS MOVIE! This is what I meant by the combination of storyline and visual effects! Stop letting those meaningless popcorn movies earn the money and destroy the movie industries!

Now let’s talk about the story! We have watched enough of Aliens trying to take over planet Earth, it’s enough of Aliens trying to destroy Earth! Nowadays, (like in District 9) human, are far more evil than Aliens! Human are far more selfish than Aliens! Now, we watch how human taking over other species’s planet!
Pandora, is a wonderful planet, it was so so so so beautiful! James Cameron focus on each and every little details in Pandora. Each steps they walk on the stone, it lights up, each and every little insects and plants that were so beautifully glowing in the dark. The mysterious and unbelievable connection between each species! The whole Pandora, is a huge network!
AND! I love the Na’vi freckles! Their freckles can glow in the dark! XD

Unlike human, the Na’vi loves their planet. The Na’vi worship their planet, worship their “Mother”. The Na’vi loves each and every species on their planet, even if they have to hunt for food, they prefer do it fast and clean, without letting the animals suffering.
There is a wonderful connection between the Na’vi and the animals. They “connect” to the horses they ride, they “connect” to the Mountain Banshee (a flying creature) they ride. They even can “connect” themselves with the plant, or they called it as Eyra, their God. Their God Eyra, is like a server of a computer network. Every creatures in Pandora that dies, go back with Eyra. They can hear than ancestors while they “connect” themselves to Eyra. The Na’vi understand that, all energy is borrowed and one day they have to give it back.
Well this is the spirit that we human should have learned!

Meanwhile, the cruel humans and scientist, trying to collect the valuable “stone”. The Na’vi home was build on the riches source of the stone. And so, the greedy human was trying to get the stone by asking them to leave their home, move to other place. Or else they will use the gunfire to get what they wanted. As the Na’vi doesn’t have great technology or any super weapons against humans.
This movie, again show how cruel and selfishness of human being. Unlike 2012, this movie delivered it in a creative way, in the wonderful Pandora. That is very memorable and convincing.

This movie success, not only because of the great CG, but every little details that director focus on. James successfully introduced planet Pandora which doesn’t exist to the audiences. After I watched the movie, I do really hope that Pandora do exists and I wanted to go there to ride the Mountain Banshee XD

In a nutshell, this surely is the MUST WATCH MOVIE! Avatar will be classic!
After watching a few rubbish movies, no doubt, I rate this movie 10/10!!!
First movie that get full marks in my blog 😛
Hope James Cameron can make another movie to introduce Pandora in more details! Like describing how beautiful is the planet before human come conquer their land. That would be great!
Besides, this movie also teach us human that we must love our Earth. Save Earth Now! In the movie Jake mentioned that we once have a beautiful planet, and we destroyed it, now we cannot let human destroy others planet again.
Although, it was just one line of dialogue, but the impact was much more stronger than 2012! Impact that remind us to protect our environment.
So please, for those who didn’t participate in Earch Hour on 328, SHAME ON YOU! Some people said that turn off electricity for one hour doesn’t make any differences. Hey are you stupid or what? The whole point of this campaign is to remind people to save the Earth! Not actually saving Earth in this one hour can make difference!

PS: If you haven’t watch the movie, remember to watch it in 3D! If you have already watched the movie in 2D, please watch again in 3D, otherwise you’ll regret XD