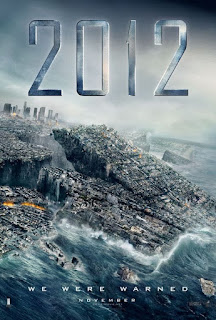 It’s movie review again.. Haven’t write one in 2 months. I’ve already skipped few movies like, Surrogate and Michael Jackson’s This Is It.. 😛 Been busy for last 2 months. Today, movie that everyone were waiting for – 2012

I’ve got 2 free movie tickets from OCBC Bank for this movie. My dad gave it to me as he can’t make it for Saturday afternoon movie. OCBC Bank has taken the hall 10 in GSC Gurney Plaza for their clients, and with free popcorn and drinks for each person ^^

Well, another dooms day movie, end of the world. Getting bored with dooms day movie, so if this one didn’t do anything epic it’s gonna be a failure. Luckily, it was epic. As you can see from the trailer, great and impressive CGI effects. However it was still a popcorn movie.

What do I normally expect from a dooms day film? Actually, from the trailer, I didn’t expect much. Knew that it would be a popcorn movie, so the thing I expect was actually simple, seeing many people run for their lives and get killed, earn audiences sympathy and make people feels sad and think. At least send a message to audiences that we must love our earth, appreciate what we have now and appreciate our loves one. It was actually a very common facts that we can see in a dooms day film, but not this one. All I get from this movie were just temporary entertained by the visual effects and temporary excitement.

2012 were mostly focus on how the world destroyed. The world I mean doesn’t mean any living creature, but the buildings, and the land. Mostly what you can see were buildings and earth collapse. Believe it or not, you can’t see much human dead body from this movie. They were too focus on how the main characters run for their life and makes me feels that, there were not much people get killed although the whole United State were destroyed. 😛

Other than that, the humanity part, they were focus on how ugly human can be when they were tried to survive. Government selling tickets to survive for those rich person to get on to the arc. However, if you really wanna see how ugly human can be, you better watch District 9 instead of this one. This movie were actually using old storyboard and old techniques, which usually we can guess what will be happened next. As you know, most of the time when came to the end of the world sure they’ll be politicians selfishness, a bad guy to create climax bla bla bla.. Boring..

Besides, the movie doesn’t really have any logic. Not because of the way how earth doomed, but because of the main character were far too lucky! Each time he were just seconds from being killed, it was like the earth waiting him to run before it collapsed. I know these can create climax and make audiences felt nervous, however.. not logic lor.. And if every movies using same technique to create the exciting scenes, wouldn’t you feel bored and expectable? And I must give compliment on this, the main character, Jackson, really good in running, his speed of running can beat the cracking earth, must nominee him to Olympics sure get Champion. Even a guy that only attend for few weeks pilot lesson can drive the plane SO WELL! That they manage to escape from a collapsing building.. Not to mention a plane can took off in a such short distance track! For those who watched the movie, you know what I mean right? **sigh**

In a nutshell, 2012, a movie that everybody were waiting for, has disappoint a lot of people. Yes, it was quite entertaining, however, it was not a memorable movie that inspire the audiences.
The director doesn’t use the Mayan prophecy about 2012 well as many people were now paying attention to it. This prophecy were just touch and go in the movie =.=” This cause that the movie wasn’t convincing at all.

If you just want to seek for visual effects, you can go for it, otherwise, better save your money, this movie if it wasn’t watched on big screen it was nothing.
Therefore, I rate this movie 5/10 for the temporary entertained and temporary excitement and awesome CGI..

I hereby attached link to the Mayan Prophecy about the REAL 2012 prophecy..

PS: I’ve get the OST of this film from you-know-where, and surprisingly found Adam Lambert singing the theme song, Time For Miracles.. Great song, enjoy ^^